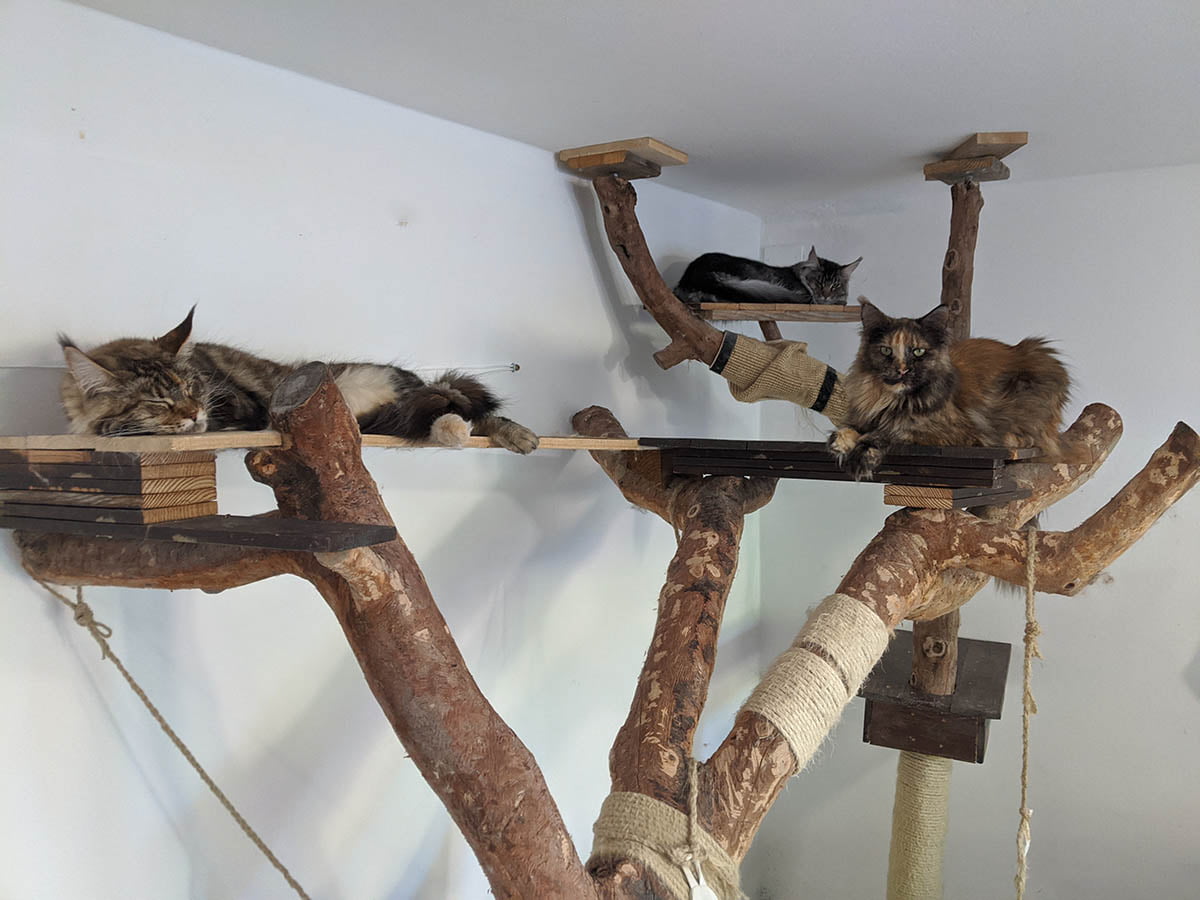 How to introduce your new Maine Coon kitten to your household cats.

So you have just purchased your new Maine Coon kitten and you are ready to take him home. However, you already have cats at home and you are worried about what will happen on their first encounter. I will be discussing in this page how to correctly introduce felines to one another. We have been advising and using the following method of introducing cats, so please read on for more information.

How not to introduce two cats to one another

I feel an anecdote may well be the easiest way to explain how not to introduce two cats together, learnt the hard way…

We once had a European cat named Jack. We found him as a week old kitten at our local beach. He had been abandoned for some reason so we decided to raise him as our own. Against all the odds and with little or no experience at the time we managed to raise him, bottle feeding him and then weening him onto solid food. He grew quickly into a confident cat. Of course we were no substitute for his real mother but we did our best at the time.

We later learned from experience in our cattery that the mother cat teaches her kittens how to behave from months 2-3 of age. This is a crucial to the development of a well balanced kitten, and something a human simply cannot emulate. Kittens grown with their mothers develop into balanced cats. It is therefore essential that kittens stay with their mothers for the first 3 months of their life.

Due to the absence of a mother cat in Jack’s life he developed unfortunate faults. For example, you could be stroking him as he purred lovingly in your lap and then all of a sudden he would leap up and forcefully attack the hand that stroked him.

We thought that another cat may help him become calmer and improve his behavior. It was at this time we purchased one of our first Maine Coons. His name was Victor, and he was about 6 months old at the time. Not losing any time we brought Victor home and left him free to explore our home and our pets…

This was a big mistake. When Jack met Victor he launched into full attack. Victor was smaller than Jack at the time and had quite the shock. We immediately separated the cats, but the damage had been done. We learnt that day that you cannot introduce two cats out of the cold. Introducing cats like this creates a permanent situation whereby the two cats will no longer tolerate each other.

From this point no matter what we did Victor and Jack could not stand to be in the same room together. We had no choice but to keep the two cats permanently separated.

How to correctly introduce two cats together for the first time

To understand how to introduce two cats for the first time you need to understand the concept behind what your are trying to achieve. Cats don’t like surprises. If you have a household cat then you have to understand that they view your home as their territory. They feel safe and relaxed in their abode. When you introduce a new ‘intruder’ cat to your home, the household cat will feel a sense of fear followed by the need to defend their space. The ‘intruder’ cat will also be fearful in a new environment with new smells.

Fear is the first and strongest emotion that is hard wired in us all, and the same is true for cats. To diminish fear you need time. Over time fear will develop into curiosity. This is the goal.

Here is a short video demonstrating a successful introduction

Over the next few weeks the cats will learn to tolerate each others presence. The first introduction was done at a stage of curiosity and not fear. This makes all the difference.

At week 3 they will bumble along with each other.

From week 4 and onward they will probably start the ‘household pride’ and may well start cleaning and snoozing together.